What does it look like to move millions of public funds away from incarceration and instead invest in the communities most harmed by prisons? And how do we get there? Black organizers in the South are leading these efforts and winning.

“We need healthcare instead of handcuffs, services instead of sentences, and to prioritize communities over cages by closing the Atlanta City Detention Center immediately.”                 — Marilynn Winn, Women on the Rise, Georgia

The Communities Over Cages: Close the Jail Atlanta Campaign has been a long struggle fought by grassroots organizations, including Women on the Rise and the Racial Justice Action Center. Two years ago, a community-based task force developed a recommendation to replace the jail with a Center for Wellness, Equity and Freedom offering housing resources, behavioral health services, office space for progressive organizations, a rooftop garden, and other resources needed to keep impacted communities safe. We have been inspired by their work and, over time, Atlanta SURJ chapter members have gotten involved.

Too often, white communities actively oppose the visionary demands and campaigns led by Black organizers and directly impacted people, and Atlanta is no exception. One of the centers of opposition to Communities Over Cages has been in the overwhelmingly white and wealthy Atlanta neighborhood of Buckhead. Over the past month, SURJ has been working to organize white Buckhead residents to actively support the Communities Over Cages campaign. In partnership with Women on the Rise and the broader coalition, we have turned out Buckhead residents to contact city council members and also to leave important public comments at council and committee meetings — as a result, we have outnumbered the opposition at key council meetings!

In addition to dismantling white support for mass incarceration in Georgia, we are helping to build the power to dismantle racist systems for the long term:

Women on the Rise envisions a world where women, families and communities are safe, whole and free — transforming lives, laws and social institutions. The years of work by Women on the Rise and the 40 organizations allied in the Communities Over Cages campaign are steadily building that vision into a reality. 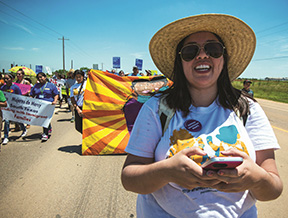